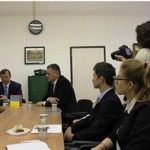 2 youth groups in Uzhhorod city, Ukraine, namely: Uzhhorod Gymnasium and European School “Alliance” joined the initiative “TIME FOR TEA”, that initiated by Momentum World organization. Aim of the project: Find a direct way to convey youth messages to the leader, which Youth chosen. All that is required is that the leader every day, spending 5 minutes, during drinking a cup of delicious tea, was thinking about something that important and actual for youth.

The both groups developed short messages / issues they consider important. They choose who their leader should hear and listen to their messages. To do this, young group has developed an original and creative package / bags with tea for leader.
• On the 21-st of January 2015 the 13-16 aged youth representatives from Uzhhood gymnasium met Mr. Bogdan Andreev, Secretary of Uzhhorod City Council
• On the 31-st of January, 2015 the 17-21 aged youth representatives met Mr. Oleg Luksha, director of the International Institute of Human and globalist “Noosphere”, vice-president of Association of Cities and villages „ Zakarpattya 21-th Century”. More than 300 youth representatives from Ukraine and other countries participated in this initiative that proposed their questions and massages within the survey organized by Uzhhorod group. The best massages had offered inside tea packages.

Meetings were held in a friendly atmosphere. Young asked a large number of the most pressing issues that concerned them, had a conversation in an informal atmosphere between the leader and youth. Youth group from gymnasium, concerned about the situation in Uzhhorod, asked questions about recycling and waste collection, improvement of tourist attraction of the city, raised the problem of the state of public transport city, the location of billboards and other issues relating to the improvement of the city.

Representatives of the youth organization “European School “Alliance” raised the questions about the situation on the East of Ukraine, as well as issues of energy security of Ukraine, asked questions on the use of alternative energy, environmental and pollution of the Transcarpathian region.

It was the first step of the initiative “TIME FOR TEA” in Ukraine and we are sure that youth groups in Ukraine will continue this initiative in future. It is very useful initiative for creation the negotiation between leaders and young generation.